The County of Worcestershire 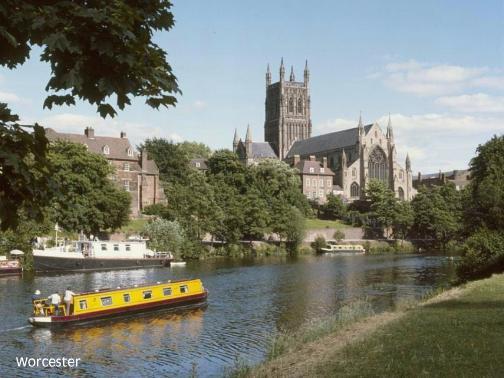 The City of Worcester with its Cathedral is, of course, one of the central landmarks of the county of Worcestershire. Situated on the banks of the River Severn the cathedral is nearly 1000 years old.

To the west, near the border with Herefordshire, is Great Malvern and the Malvern Hills famous for the spring water that owes it's purity to the hard rocks from which it flows. A million bottles are sold throughout the world every year. The hills are formed from extremely ancient rock, dating to 680 million yeas ago in the Precambrian era. There are six main peaks in the hills the highest of which is the Worcestershire Beacon that rises to almost 1400 feet and on a clear day overlooks 15 counties, the great cathedrals of Hereford, Gloucester and Worcester are all visible from the summit.

Probably Malvern's most famous son was Edward Elgar who is said to have composed much of his music while walking these hills and is buried at St.Wulstan's churchyard in Little Malvern.

Locations nearby in Gloucestershire:
Tewkesbury

Locations nearby in Shropshire:
Ludlow

Locations nearby in Herefordshire:
Brockhampton

Have you visited Worcestershire?
Please share your experiences either with a