The County of Carmarthenshire. 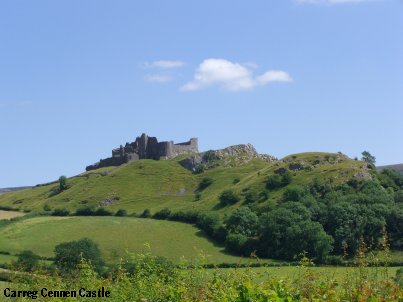 Carmarthenshire (Sir Gaerfyrddin) is generally upland and mountainous with Fforest Fawr and Black Mountain extending into the east of the county and the Cambrian Mountains into the north. This contributes to some spectacularly beautiful landscapes. The coast on the southern border is dotted with many fishing villages and sandy beaches.

There are market towns, historic buildings, including castles, heritage railways and gardens such as the National Botanic Garden of Wales. If you drive then there are a multitude of little back lanes which can lead to stunning views on the higher ground. The Brecon Beacons National Park extends into the eastern part of the county.

Carmarthenshire is also interesting geologically with the oldest rocks consisting of black shales of Tremadoc (Cambrian age). There are also conglomerates, sandstones and shales, with beds of volcanic ash and lava of Arenig (Ordovician) age, and areas of intense folding and faulting. The Llandeilo shales at Llandeilo are famed for their trilobites and we have, ourselves, found one in that area.

Have you visited Carmarthenshire?
Please share your experiences either with a