The County of Derbyshire 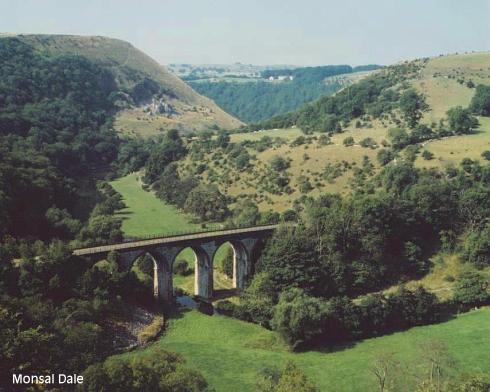 The county of Derbyshire includes a large part of the Peak District National Park which starts just above Ashbourne and extends northward to just above Holmfirth in Yorkshire. The Peak District may be divided roughly into two parts, the Derbyshire Dales (the White Peak) and the Gritstone Moorlands (the Dark Peak). Derbyshire also has more than its fair share of stately homes of which Chatsworth House, near Bakewell, is probably the most well known.

If you like walking then the Peak District is the place to go. It is covered in footpaths and the scenery is varied and wonderful. Even if you don't like walking there is so much to see it is sometimes a little overwhelming but you will never run out of things to do.

Dovedale, near Ashbourne, was made famous by Izaak Walton and Charles Cotton who wrote 'The Compleat Angler'.

The high ground above Buxton is in the Dark or High Peak; the highest part of which is Kinder Scout. The Pennine Way footpath starts in this region at Edale.

Locations in Derbyshire:
The Edale area (Kinder Scout)
The Gritsone Edges and Moorlands
The Limestone Dales (Castleton/Ashbourne)
The Castleton area
The Bakewell area
The Youlgreave area
The Hartington area
The Ashbourne area (Dovedale)

Have you visited Derbyshire?
Please share your experiences either with a