on footpaths only on foot.
on bridleways on foot, on horseback and on a pedal cycle.


on footpaths only on foot.
on bridleways on foot, on horseback and on a pedal cycle.

Legally, a public right of way is part of the Queen's highway and subject to the same protection in law as other highways, including trunk roads. Note that it is legal to cycle on a bridleway and although it is not illegal to cycle on a footpath only pedestrians have a right of way so that in riding a bicycle on a public footpath you would be committing trespass and the landowner could bring a case under civil law against you if he so chose. Cyclists on bridleways must give way to horse riders and pedestrians. Pushing a cycle on a footpath was a grey area in law but has now been resolved - anyone pushing a bicycle is a "foot-passenger" (Crank v Brooks [1980] RTR 441) and is not "riding" it.

The landowner has a duty to prevent crops, excluding grass, from making the path difficult to find or follow and you have every right to walk through crops growing on or over a path as long as you follow the correct line as closely as you can.

You can remove any obstruction provided that you are a bona fide traveller on the path and have not gone out for the specific purpose of moving the obstruction, and you remove only as much as is necessary to get through. If you can easily go round the obstruction without causing any damage, then you should do so.

Some of the many types of footpath features. 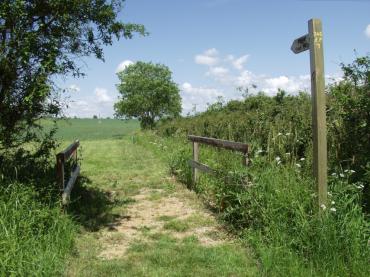 This footpath starts from the edge of a country lane and the wording is 'Public Footpath'. In this case you will need to know, by using a map, where the path actually goes. This post and sign is made from wood. 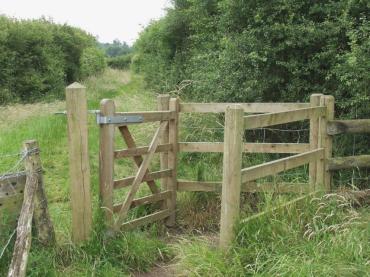 This is a 'Kissing Gate'. (View full size)

Its purpose is to give easy passage to people but, at the same time, act as a barrier to animals.

To pass through you step into the 'V' shape on the right allowing you to move the gate to the other post and so walk out the other side. 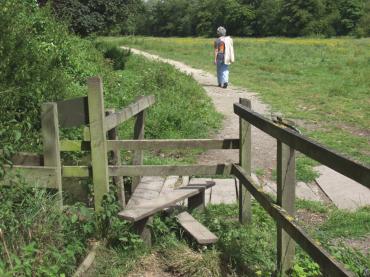 This is a typical wooden stile. (View full size)

Its purpose is to give easy passage to people but, at the same time, act as a barrier to animals. This type of stile sometimes has only one step rather than the two that this stile has.

Stiles come in all shapes and sizes and this is just one of the many types. 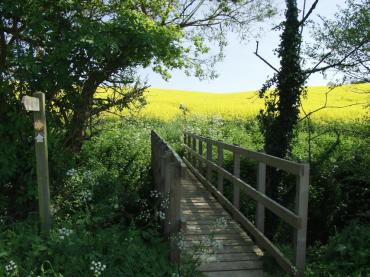 This is a footbridge. ( View full size)

In this case the bridge is carrying the footpath over a small stream. The stream is about 6-7 feet down so a fairly substantial bridge is required.

Bridges come in a variety of shapes and sizes some consisting of just one wide plank. With the simpler variety it is usually to take the path over a shallow ditch perhaps no more than 18 inches deep. 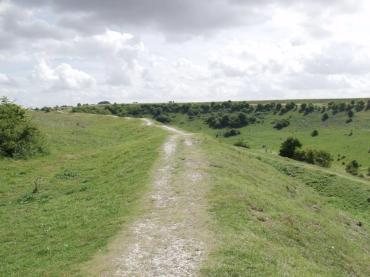 Some are well used and, therefore, well worn as can be seen here. Others may be overgrown or less obvious as can be seen in the example footpath navigation below and some, shall we say, can be a little more adventurous.

An example footpath navigation through a mainly agricultural landscape and a two mile walk through the Suffolk countryside with pictures.

There are also some routes designated as 'Permissive paths'. These are not public rights of way but routes which have been agreed with the landowners to permit public access. Details, including maps, can be found at Conservation Walks & Rides.