London's Inns of Court and Inns of Chancery. 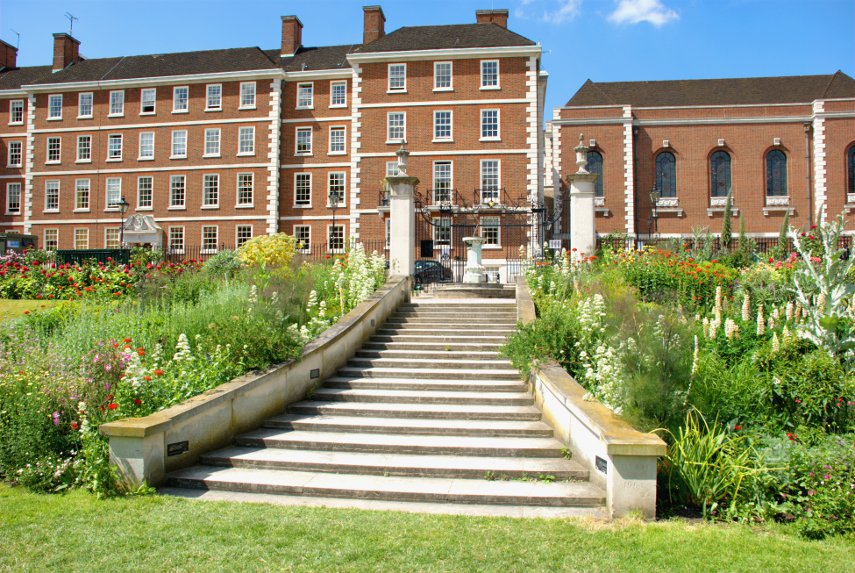 Gray's Inn (Grays Inn Road) does not claim a specific foundation date but has existed on the present site since at least 1370. Lincoln's Inn (South of Holborn) is able to trace its official records to 1422 whilst the Inner and Middle Temples (Between Strand and Embankment) are recorded as separate societies in a manuscript yearbook of 1388. However, by tradition, none of the Inns claims to be the oldest of the four.

The Inns of Chancery were a group of buildings and legal institutions in London initially attached to the Inns of Court and used as offices for the clerks of chancery, from which they drew their name. 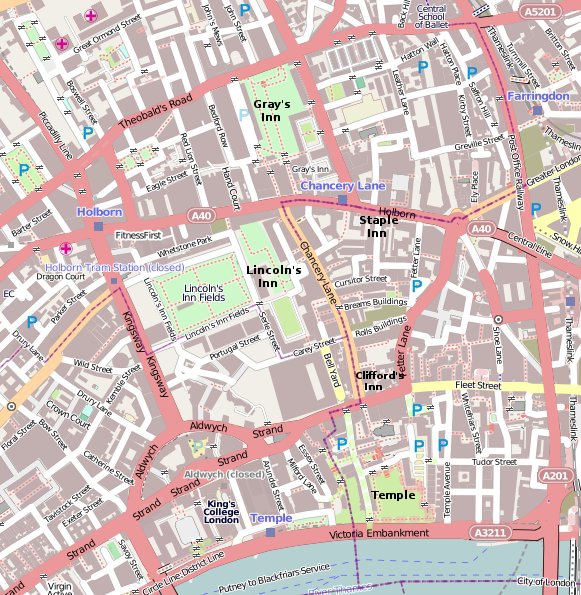 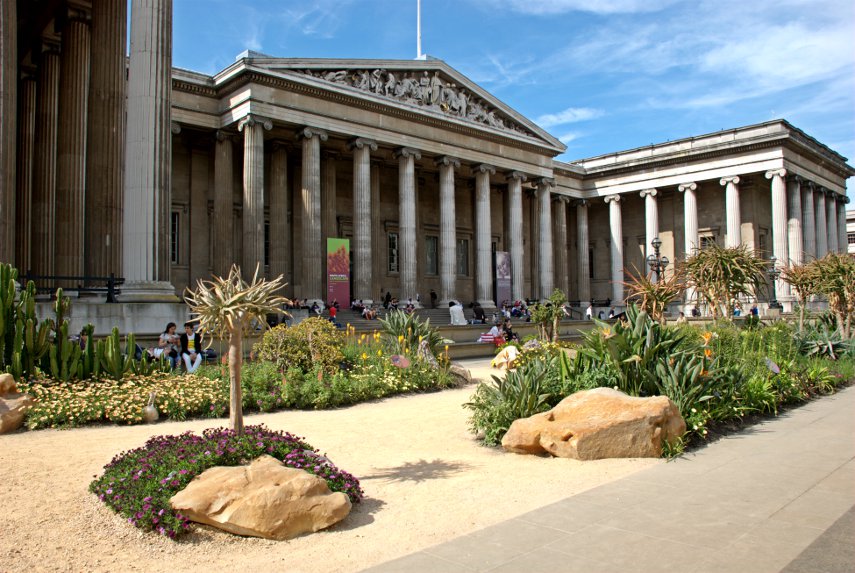 There are many museums distributed around London; some in the centre and some on the outskirts. Most are free but some do make a charge. We certainly haven't been to all of them but we have visited some including:

the British Museum in Bloomsbury.

The next three are close together in South Kensington:
the Victoria and Albert Museum
the Natural History Museum
the Science Museum

Also:
the Museum of London in Barbican.
the The British Library, St. Pancras.
the Wallace Collection in Manchester Square, the London Transport Museum (entrance charge).


All of these are free and most of them would require more than a day to see properly. Another free museum is the Faraday Museum in the Royal Institution but which is open only during office hours.

Others that we haven't yet visited are:

There are even more. For a complete list see Museums in London 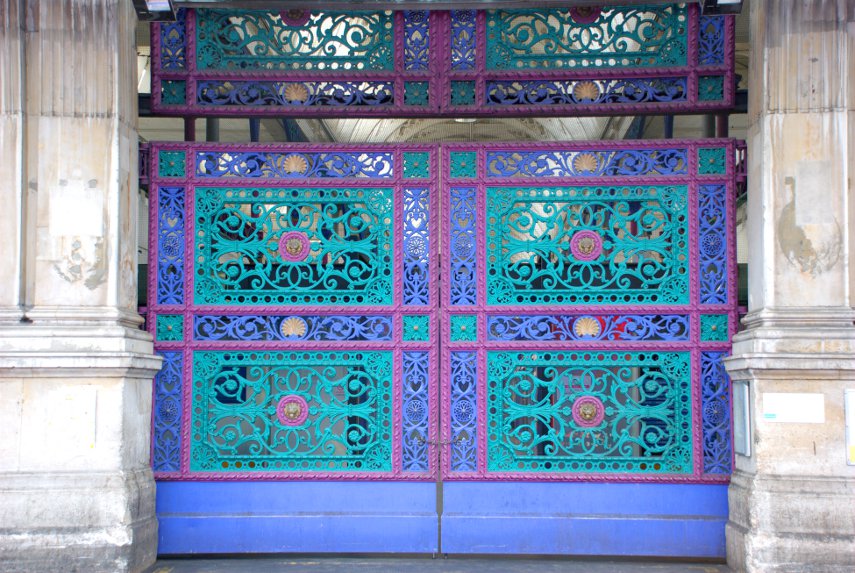 There are five old market buildings which are worth visiting.

Covent Garden Market, in the Covent Garden area, used to be the old flower and vegetable market but has been converted to a shopping and tourist area with an indoor market containing stalls. There are often open street entertainers in evidence.

Leadenhall Market, in Gracechurch street near St. Paul's cathedral, was originally a meat, game and poultry market but now consists of small shops, cafes and restaurants with market stalls on some days.

Smithfield Market, east of Holborn Circus, is still a wholesale meat market but the public have access through the avenues. It is an imposing building.

Spitalfields Market near Liverpool Street Station has been a market on the site since 1638 when Charles I of England gave a licence for flesh, fowl and roots to be sold in what was then a rural area on the eastern outskirts of London. The existing buildings were built in 1887 to service a wholesale fruit and vegatable market, owned by the City of London Corporation, but the vegatable market has since moved to new premises. The current market building houses a popular fashion, food, vintage and general market, open seven days a week, but is particularly lively on Sundays.

The old Billingsgate Market building, on the north bank of the Thames between London Bridge and Tower Bridge, was originally a wholesale fish market. The fish market has now been moved and the current building is now a hospitality and events venue. 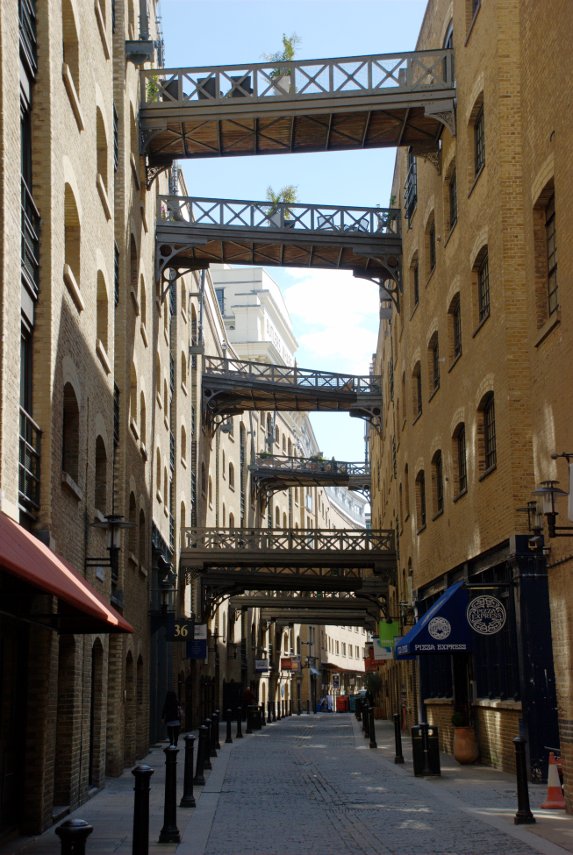 London's alleys and lanes are so numerous it would be impracticable to describe them all here. Needless to say wherever you are in Inner London there will be an alley or lane near you.

The cobbled lane in the picture is Shad Thames at the south end of Tower Bridge and running east parallel to the River Thames. There are numerous other narrow lanes such as Lovat Lane near the Monument, Middle Temple Lane which runs between the Embankment and Fleet Street, Cloth Fair near Smithfield Market, Floral Street in Covent Garden and Charterhouse Mews off Charterhouse Street north of Smithfield Market.

Holland Park Mews, in Holland Park, has an interesting story to tell. These are quite expensive properties now and much sought after whereas when they were built you would be well down the social scale and living above the horse that you were there to look after.

Alleys are also abundant such as Lazenby Court, Goodwin's Court and Cecil Court all in Covent Garden.

Neal's Yard in Covent Garden is an unusually colourful alley or court and Cucumber Alley is an interesting example where the route of the old alley remains but the buildings surrounding it have been rebuilt in recent times.

There are numerous alleys around Leadenhall Market which Charles Dickens would have frequented when he was alive. Some other examples of alleys are Mason's Avenue and Guildhall Buildings both near the Guildhall

Just off St. James's Street at the end of Pall Mall is Pickering Place and Blue Ball Yard both of which would be easy to miss. 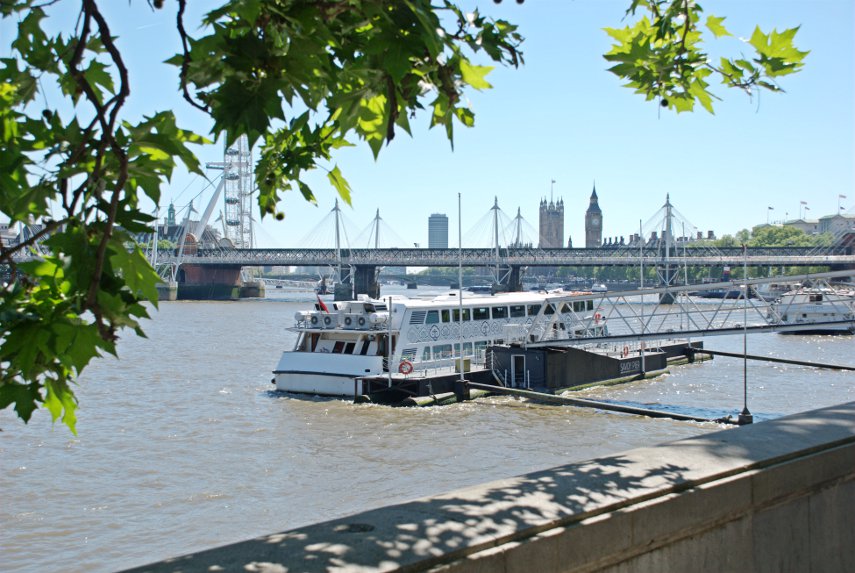 The River Thames is, of course, one of London's main features running, as it does, right through the middle of the city. There are walkways on both the north and south banks and the section in which most visitors will be interested is, I think, between Westminster Bridge and Tower Bridge.

The walk along the south bank, The Queen's Walk, takes you past the London Aquarium, the London Eye, the Royal Festival Hall, the National Theatre, the Tate Modern and the Millenium Bridge, Shakespeare's Globe Theatre, and the Golden Hind.

Very near the South Bank is Southwark Cathedral and a little further on is the London Dungeon. Then back on the the South Bank on The Queen's Walk which passes Hay's Galleria, HMS Belfast and then the rather modernistic City Hall.

Finally we reach Tower Bridge and just beyond the bridge on this side is Shad Thames.

The walk along the north side starts at the Palace of Westminster (Houses of Parliament and the Big Ben Clock Tower) and will take you along the Embankment past Cleopatra's Needle, Victoria Embankment Gardens, the Temple, then past or through Fruiterer's Passage. A short diversion will take you to the Monument which is a little north of the riverside walk then back to the riverside walk looking out for the steps up to the high level viewing platform, on past the Old Billingsgate Fish Market building and finally to the Tower of London and Tower Bridge. Near the Tower is the Church of All Hallows by the Tower.

You could extend your exploration of the River Thames by taking a short trip by boat or on the DLR (Docklands Ligh Railway) to Greenwich where you could see the Old Royal Naval College, the Old Royal Observatory and you could even walk under the Thames. 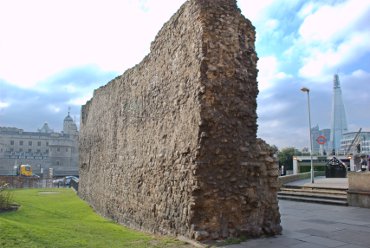 Londinium was established by the Romans about 43 AD which is nearly 2000 years ago. Consequently there isn't a lot left which is both visible and accessible but there is some.

The section of Roman wall shown in the photograph is just outside Tower Hill Station and there is a further section a short distance north in the courtyard of the Grange City Hotel (See map below).

The Guildhall Art Gallery has a display of some excavated ruins of a Roman Amphitheatre which, at the time of writing, is free. There are various Roman remains and artifacts on display in the Museum of London including a very impressive mosaic.

There are other sections of Roman wall around the barbican such as this one. The Museum of London does tours of an excavation of part of a Roman fort close to the museum. The tours are free but occur only on specific days. See Tours schedule and look for 'Roman Fort Visit'. 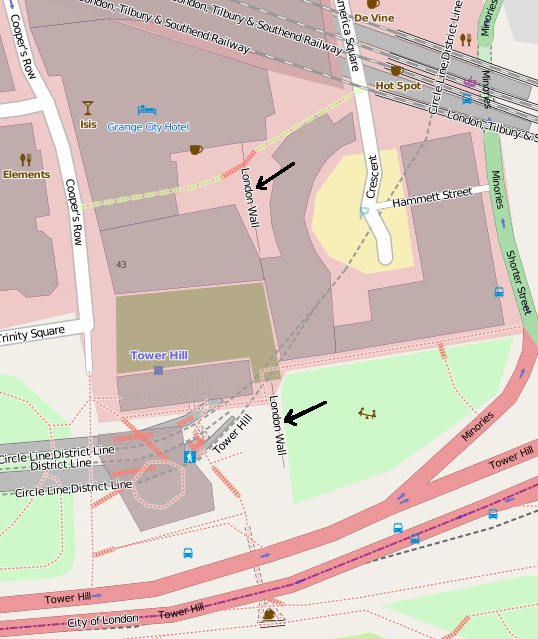 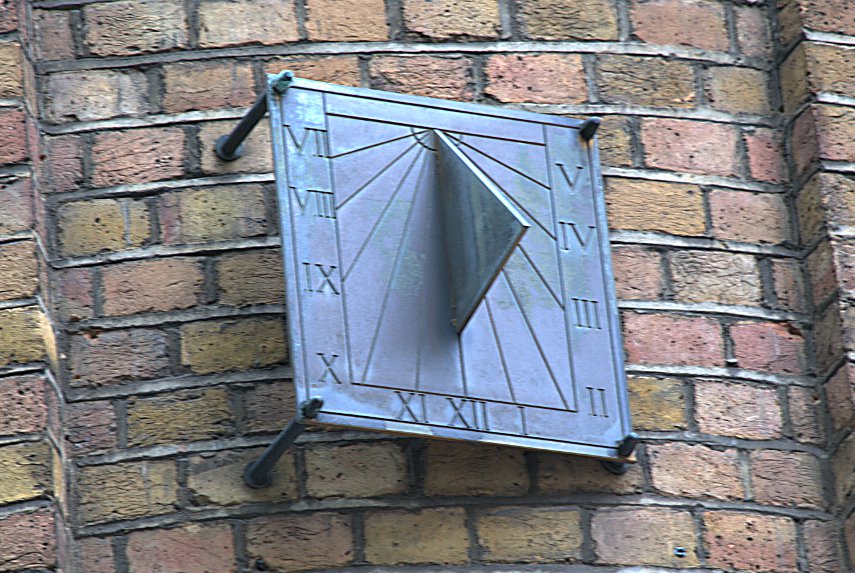 There are many locations in London that are not on the normal tourist's list. These locations can be divided roughly into two groups. Those places which are not well known (Hidden London) and places which very few people know about (Unknown London). We shall try to cover both of these groups.

In the first group (Hidden London) there are places like the Inns of Court, Kensington Roof Gardens, Holland Park, Seven Dials, Guildhall, Leadenhall Market, Primrose Hill and The Hampstead Pergola.

We can't list them all, if only because we haven't found them all yet, but I'm sure you get the idea. Keep your eyes open. 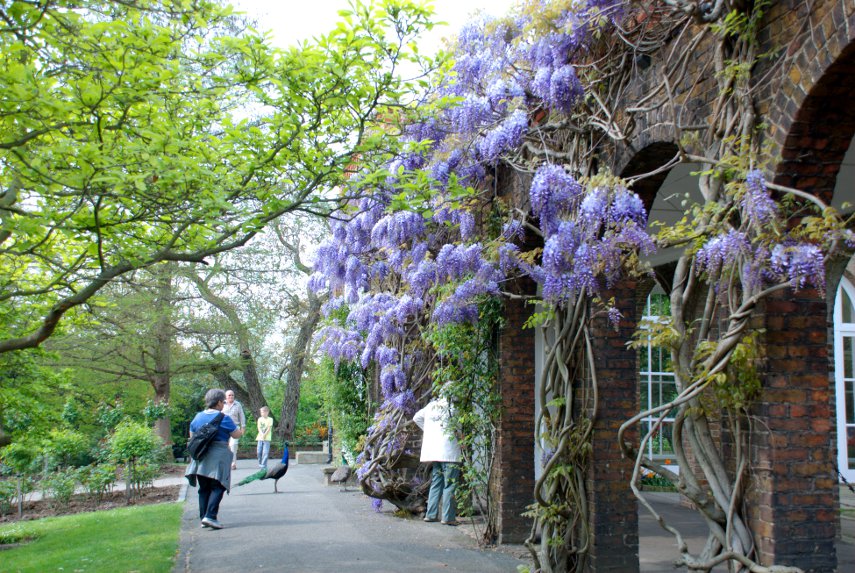 Lets start with the big four. These are the four main parks within Inner London. St. James's Park (58 acres), Green Park (47 acres), Hyde Park (350 acres) and Regent's Park (410 acres) which encompases London Zoo. These four parks are shown on the map below. 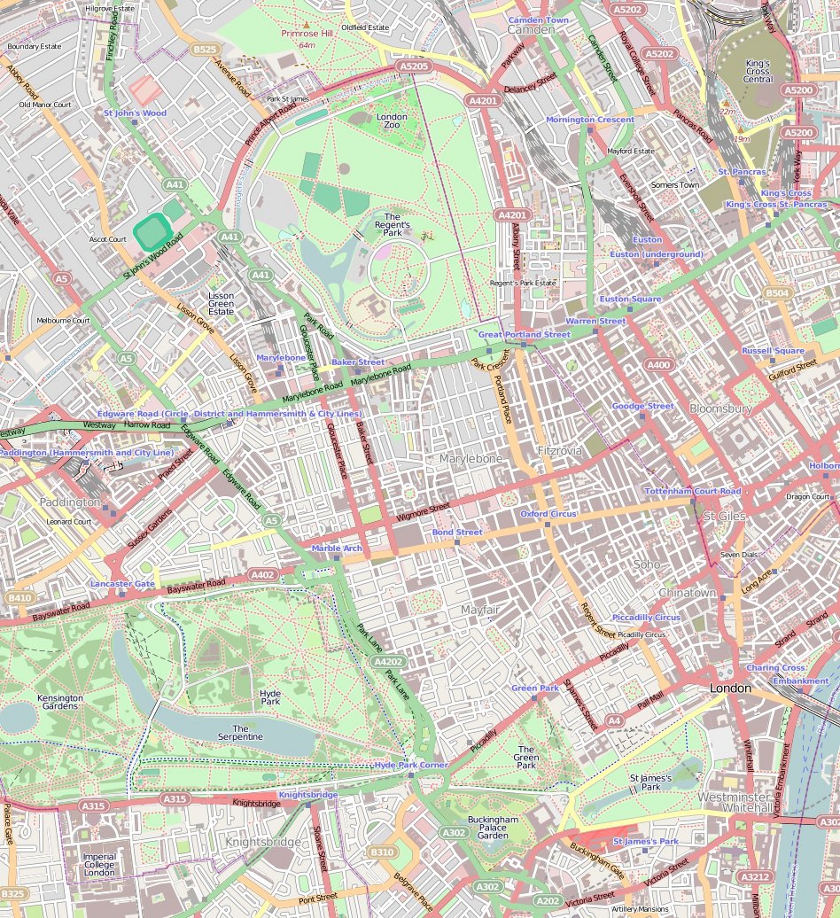